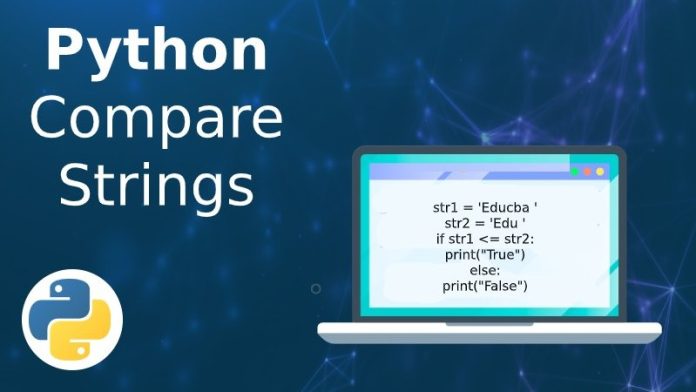 Blog Introduction: In Python, there are a number of ways to compare strings. In this blog post, we’ll explore a few of the most common string comparison techniques. By the end of this post, you should have a good understanding of when and how to use each method. How to compare strings in Python

One of the most common ways to compare strings is by using the equality (==) and inequality (!=) operators. These operators compare two strings character-by-character and return a Boolean value indicating whether or not the two strings are equal. For example:

Keep in mind that these operators are case-sensitive, which means that ‘hello’ is not equal to ‘Hello’. If you wanted to compare two strings without regard to case, you could convert both strings to lowercase or uppercase before comparing them:

There are also several built-in string methods that can be used for comparison purposes. These methods are Casefold(), Eq(Gt))), Lt(), Ne(), Swapcase(). We won’t go into detail on all of these methods here but feel free to check out the Python documentation for more information on each method. To use these methods, simply call the method on one string and pass in another string as an argument: method(string). For example: str1 = ‘HELLO’, str2 = ‘hello’ str1.casefold() == str2.casefold() # True (case doesn’t matter)

As you can see from the output above, even though str1 is uppercase and str2 is lowercase, because we’ve used the casefold() method, they are considered equal by Python.

When it comes to programming languages, there is a lot of debate about which one is the best. However, when it comes to Python, there is no denying that it is one of the most popular languages out there. One of the reasons for its popularity is that it is very easy to learn. Another reason is that it has a lot of features that make it perfect for a wide range of applications.

Hopefully, this post has given you a good overview of some of the most common ways to compare strings in Python. As always, if you have any questions, please leave a comment below! Thanks for reading.